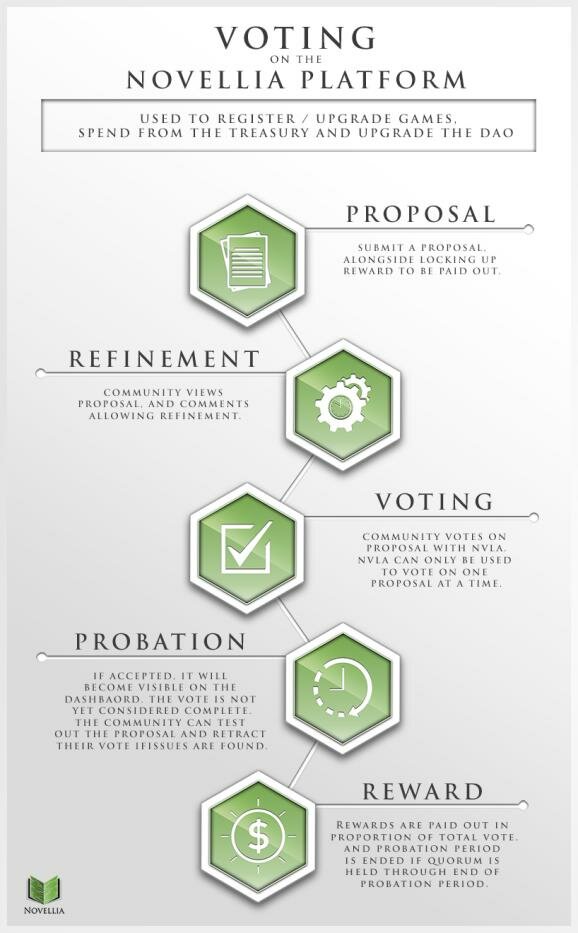 Token holders are able to vote for DAO actions that affect a multiverse they have played before, as documented by NFTs held in their wallet.

These actions include adding new games and dApps to specific multiverses which are then surfaced in the Dashboard desktop application. There are actions to add and remove the multiverses themselves.

Voting is a function of actively participating Novellia (NVLA) holders and the token’s total supply. We do not introduce the use of NFTs or additional assets. These may not have a finite supply or may be subject to centralized authorities.

All voting parameters can be changed by a vote.

A majority vote is not actually 50% of the total supply. The percent of tokens actively used for voting may be much lower. Token holders must set initial parameters by voting until they are representative of the circulating supply.

The voting quorum is designed to disincentivize low quality content from being registered. Token holders are rewarded in Novellia (NVLA) for voting. The proposal maker incentivizes people to actively vote for or against them in order to receive rewards that they supply as a cost for creating the proposal.

To prevent setting the quorum parameter to a malicious value, it is illegal to set it beyond an interval derived as a function of the percent of active voters. Such as proposal would automatically be rejected.

Here we have presented a minimal concept for a voting implementation. The full system is likely to be more complicated and must undergo extensive testing and pass an audit.